This site uses own and third-party cookies to offer a better service. If you continue browsing we will consider you accepting its use. 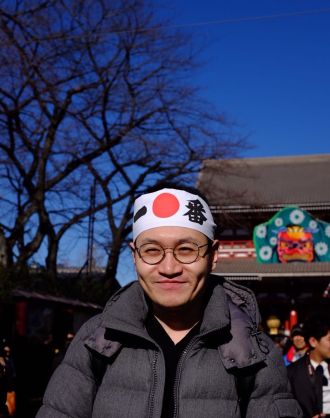 In March and April of 2020 Mr. Bo Li performed a secondment from University of Birmingham, UK, to the company Ma+D in San Sebastian, Spain. During his internship he worked on activities related to Work Package 1 and 2. 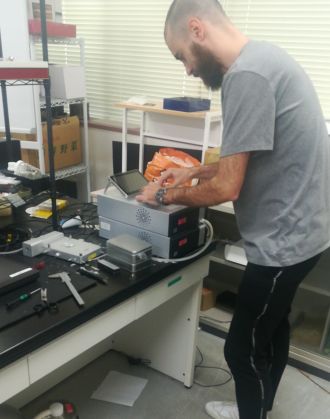 Nicolás is a PhD student from Basque Center for Macromolecular Design and Engineering, POLYMAT (UPV/EHU, San Sebastián, Spain), in the Advanced Multiphasic Polymer group lead by Prof. Alejandro J. Müller. From March to June he is doing in an internship for three months at the Department of Organic Materials Engineering with Prof. Go Matsuba in Yamagata University in Yonezawa. He is working in the characterization of block copolymers with PLLA, studying the crystallization process and the crystalline structure using different techniques as Raman and Infrared spectroscopy, X-Ray diffraction and Atomic Force Microscopy. 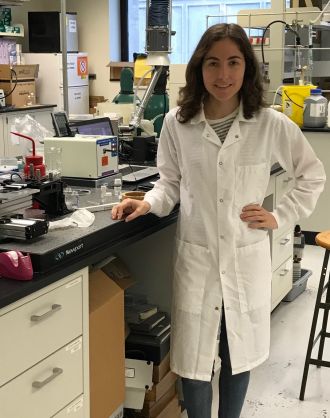 Eider Matxinandiarena is a PhD student of Advanced Multiphasic Polymer Group at the University of the Basque Country in San Sebastian. She is currently in an internship of three months with Prof. J. Albert at the Biomolecular and Chemical Engineering Department at Tulane University in New Orleans. She is working on the preparation of thin films of biodegradable and biostable diblock copolymers and triblock terpolymers by flow coating. The aim of this work is to study the morphology by characterizing the materials by Atomic Force Microscopy (AFM). 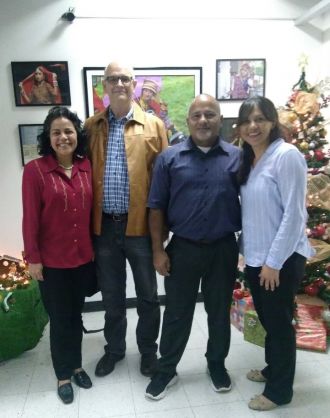 Prof. Alejandro J. Müller (second from the left) appears in this photograph at the Simón Bolívar University (USB) Polymer Group´s Lab (entrance hall with Christmas Decorations) in Caracas, Venezuela. Prof. Aleida Sandoval appears to his left and to his right are MSc. Juan López and Prof. Evis Penott. They are all part of the BIODEST project.

During this visit (December 13, 2019 through January 5, 2020) the following activities (part of Work Package 3, task 3.2 of the BIODEST project) were performed: Discussions with Evis Penott, Juan López and Aleida Sandoval about ongoing experiments at USB regarding self-nucleation and crystallization kinetics of PLLA blends (cyclic/linear) and PLLA nanocomposites with nanoparticles (ZnO2). Results analysis and establishments of new protocols to determine spherulitic growth and overall crystallization kinetics for specific samples. Discussions on the Applications of the Avrami equation to fit experimental data of slow crystallizing Polylactide samples. Planning of new secondments. 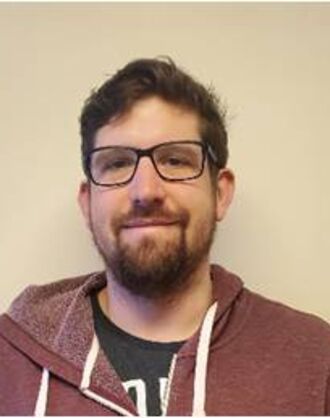 Jeffrey Foster works at the University of Birmingham (United Kingdom). He earned his B.S. and M.S. from California Polytechnic State University (CA, USA) and his Ph.D. in Chemistry from Virginia Tech (VA, USA). His research focuses on the use of ring-opening polymerization to prepare nanoparticles or to functionalize biomolecules. From December 2019 he did a secondment at Tulane University in New Orleans, USA with Prof. Scott Grayson for a period of two months. The activities during his stay, as part of the BIODEST program Work Package 2, involved the study of polymerization conditions on polymer structure including end group chemistry and repeat unit structure. The synthesized polymers were studied with Matrix Assisted Laser Desorption/Ionization mass spectrometry, on which the host group possesses significant expertise. 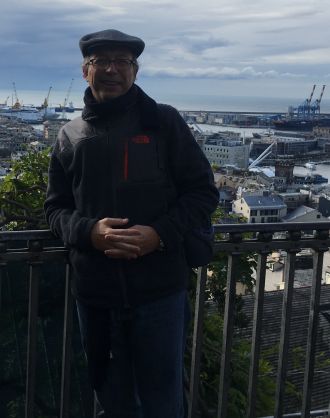 Cristián Puig works at Simón Bolívar University (Venezuela). His first degree is in Materials Engineering (Simón Bolívar University) and his Ph.D.  is in  polymer physics (University of Bristol, United Kingdom). His research interests include morphology, melting and crystallization behavior of polymers. From november 2019, he is doing a secondment at University of Genoa with Prof. Dario Cavallo, for a period of three months. The activities during his stay are related to Work Package 4 of the BIODEST program that involves preparation of blends of PLLA with commercial nucleating agents (task 4.1), study of the crystallization behavior of PLLA with some novel nucleating agents (task 4.2) and measurements of tensile properties of inmiscible ternary blends (task 4.3). Last year, Dr. Puig carried out a secondment at UPV/EHU. 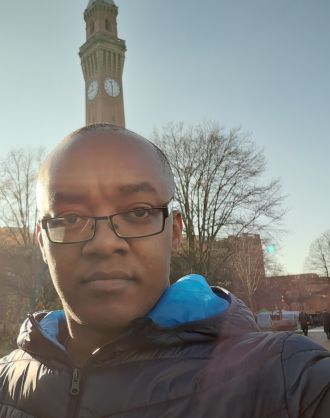 Rueben Pfukwa is a senior researcher at Stellenbosch University’s Department of Chemistry and Polymer Science. He is interested in the synthesis of well-defined homo and block copolymers, via controlled polymerization methods, as well as their hierarchical self-assembly for morphology control on a nanometer length scale, for application in nanotechnology and in drug delivery. He is working in work package 5 of the BIODEST program (task 5.2).

He is currently on secondment for two months (5/10/2019 to 7/12/2019) at Birmingham University in the group of Prof. Andrew Dove, working on the crystallization driven self-assembly of polyester block copolymers. 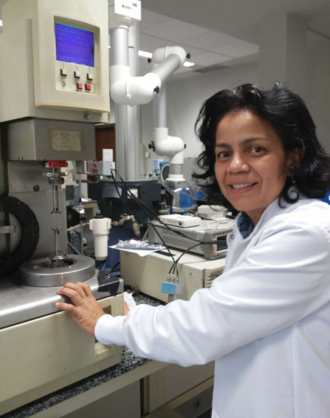 Aleida J. Sandoval is a full professsor at Simón Bolívar University in Caracas, Venezuela. She is an Agroindustrial Engineer with a MSc and a PhD in Food Science from the University of Reading (England, UK). She has been working with Prof. AJ Müller for more than 15 years on the area of food biopolymers. Their work has been dedicated to the thermal transition and thermo-mechanical and rheological changes of biopolymers with application to the food industry. She is currently working in work package 3, Task 3.2 and 3.3 of the BIODEST program. She will be at UPV/EHU for three months until December 2019. 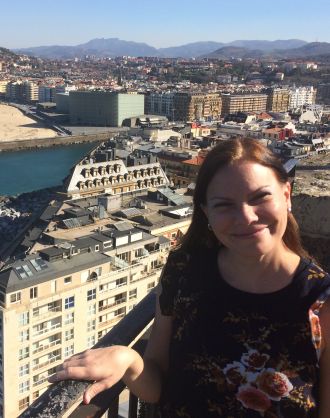 María Virginia Candal Pazos is a full professor and the coordinator of the Polymer Group II at Simon Bolivar University (USB) in Caracas, Venezuela. She is a Materials Engineering (Simón Bolívar University) and her Ph.D. is in Materials Science and Metallurgical Engineering (Universidad Politécnica de Cataluña, Spain). Prof. Candal works with polymer processing including 3d printing, mechanical properties of polymers and design of plastic parts including medical and consumer devices. From January 2019, she is working at UPV/EHU in San Sebastian, Spain with Prof. Alejandro Müller, for a period of eleven months. She is working in work package 3, Task 3.4 of the BIODEST program. 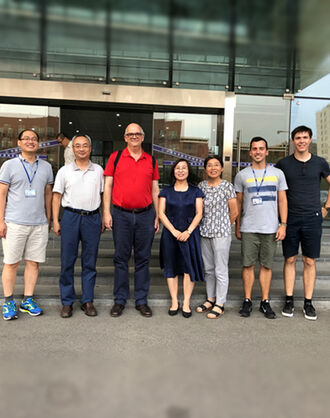 Prof. Alejandro J. Müller (third from the right) is an Ikerbasque Research Professor at POLYMAT and UPV/EHU. He is the coordinator (PI) of the RISE-BIODEST project. This photograph was taken during his second secondment to ICCAS (Institute of Chemistry, Chinese Academy of Sciences, Beijing) in front of building 8. His visit lasted one month, 30th July 2019 to 31st August 2019. On the far right of the picture is Jean-Emile Potaufeux, a PhD student from Mons, who was finishing his secondment at ICCAS.
During the visit he performed activities within Work Package 3 (which he coordinates), tasks 3.1 and 3.2 of the BIODEST project.

He also attended the EP2019 meeting (Engineering Polymers) in Yinchuan organized by ICAAS, where networking activities were conducted together with ICCAS staff and Prof. Dario Cavallo from Genoa, who also attended the meeting. 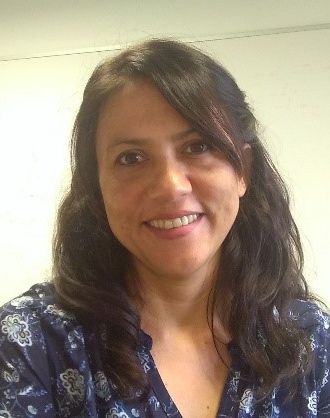 Evis Penott is a junior assistant professor at Simon Bolivar University (USB) in Caracas, Venezuela and is the coordinator of the Polymer Group I at USB. She is a chemist and obtained her PhD at Bayreuth University – Germany. Prof. Penott works with synthesis of hydrogels for biomedical applications, synthesis of polymers (ATRP and micellar copolymerization) and has experience in the field of rheology of nanostructured fluids. She did a secondment at UMONS with Prof. J.M. Raquez, working in Work Package 2 of the BIODEST program (task 2.2). There, she was synthesizing a polyester copolymer and hydrogels based on PEG. She stayed in Mons two months (from June to August 2019). 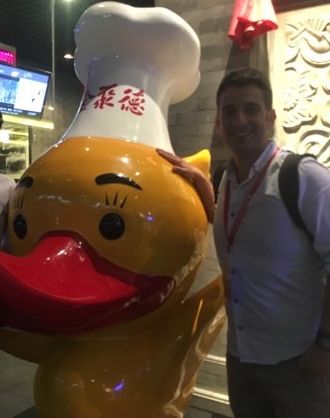 He works in Work Package 3 of the BIODEST program (tasks 3.1 through 3.3). He will be in Beijing for one months (08 of July to 08 of August 2019) working in the characterization of polyesters using WAXS and SAXS. 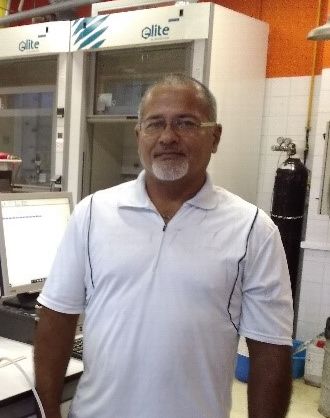 Juan López Brito belongs to the technical staff of the Polymer Group from Simón Bolívar University in Caracas, Venezuela. He is a Chemist with an M.Sc. in Materials Engineering and has ample experience in the preparation and observation of Polymer Samples by Transmission Electron Microscopy. He also works with DSC, TGA and polarized optical microscopy, amongst other polymer characterization techniques.

He is doing a secondment at UPV/EHU with Prof. A.J. Müller determining crystallization kinetics and morphology of biobased copolymers. He works in Work Package 3 of the BIODEST program (tasks 3.1 through 3.3). He will be in San Sebastian two months (July and August 2019). This is his second secondment to the UPV/EHU. 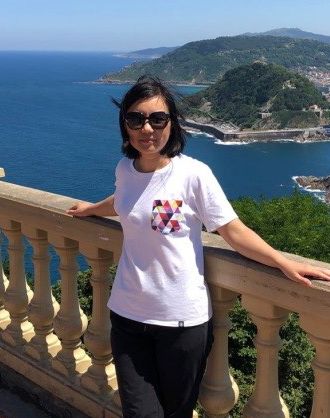 Yunlan Su belongs to the faculty from Institute of Chemistry, Chinese Academy of Sciences. She is an Associate Professor with a Ph.D. in Chemistry from Peking University and focuses on the interfacial crystallization of polymer nanocomposites. She is familiar with DSC, WAXD/SAXS, TGA and PLOM, amongst other polymer characterization techniques.

She is doing a cooperation research at UPV/EHU with Prof. A. J. Müller determining crystallization kinetics and morphology of nanocomposites with polymeric matrices and silica nanoparticles.  She focus on the measurements of Flash DSC and AFM during her stay at UPV/EHU. She works in Work Package 3 of the BIODEST program (tasks 3.1 through 3.3). She will be in San Sebastian two weeks (July 8 to July 21 2019). 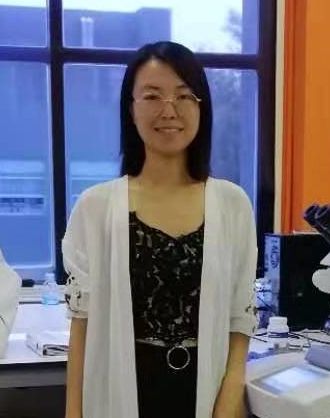 Guangyu Shi belongs to the staff of the Key Laboratory of Engineering Plastics, Institute of Chemistry in Beijing, China. She is a PhD. student in polymer physics and chemistry and has ample experience in the preparation and characterization of polymer infiltrated samples by DSC, SEM, and WAXS. She is doing a secondment at UPV/EHU with Prof. A.J. Müller determining crystallization kinetics of biobased copolymers. She works in Work Package 3 of the BIODEST program (tasks 3.1 through 3.3). She will be in San Sebastian six months (from March to August 2019). This is her first secondment to the UPV/EHU. In this secondment she has learned a new characterization technique: FlashDSC, this is an ultra fast calorimetry, capable of heating samples up to 40.000 K/s. 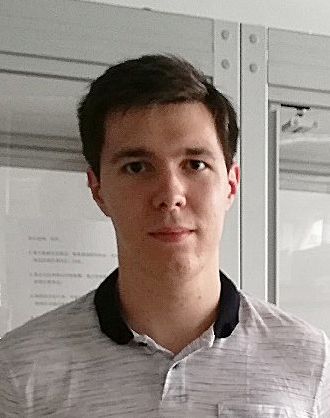 I am currently doing an internship of 2 months in the Institute of Chemistry, Chinese Academy of Science (ICCAS), coming from the Laboratory of Polymeric and Composite Materials (LPCM) of the University of Mons. My work here is related to the “Understanding structure, morphology, functionality and properties of biodegradable polyesters”. During the stay, I will work on the understanding of the evolution of the crystalline structure of ionic polylactide-based nanocomposites under mechanical testing for my PhD thesis. 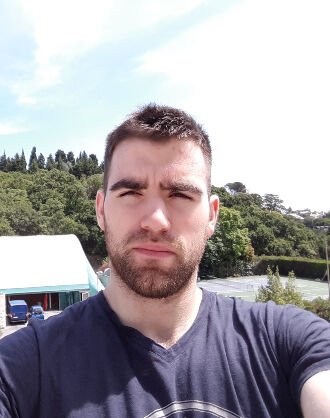 Hi! This is Ander Martin from Spain. At the present time, I’m doing my secondment at Universitá Degli Studi di Genova, I came from San Sebastian, more precisely I belong to Ma+D waste recovery engineering business company. My task at the company is focused on WP1 where my scope is to produce lactic acid from renewable resources. For this purpose, lignocellulosic biomass is collected and processed to convert biomass waste into profitable chemicals.

The activities in which I’m working at Genova involves the synthesis of different amide based nucleating agents (NA) that improves the crystallinity and crystallization kinetics of the bio renewable poly lactic acid (PLA) during its processing as part of the WP1, task 1.4 (Synthesis of novel soluble/self-assembly nucleating agents based on symmetric oxamide, α-ketoamides compounds).